IPL jersey online purchase links are placed here. The craze for the Indian Premier League is undoubtedly increasing with every season. More and more fans are flocking to the stadiums, wearing the colours of the team they are supporting. As a result, the IPL franchises have released their official IPL 2020 merchandise which can be bought online easily. IPL jersey 2020 online shopping links are placed below for all teams. 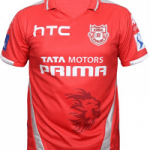 Kings XI Punjab Jersey 2020: Kings XI Punjab have listed a few portals – Amazon, T10Sports and Flipkart, from where you can buy their jerseys, shorts, caps and arm sleeves online. The jerseys can also be purchased globally from thesouledstore. Although the franchise offers a host of merchandise including a t-shirt, Lassi Da Gilaas, customized mugs, team badges and other merchandise, the most popular is the replica team jersey which always sells the fastest. They are bright red hue with a silver stretch along the sides. KXIP jerseys have an eye-catching and attractive design which is one of the better ones in the IPL.

The KXIP roster has been strengthened during the player auction as it looks to turn around its fortunes. The fans of this franchise from the state of Punjab are perhaps the most passionate. The energy of the crowd which throngs the Punjab Cricket Stadium in Mohali, which serves as the home ground for the Kings XI team, is almost unrivalled. The colours in the stadium and the deafening noise are all a sight to behold for any cricket lover in this country. Buy KXIP tickets 2020 here. 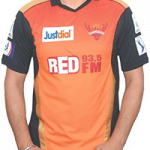 Sunrisers Hyderabad Jersey 2020: The franchise from Hyderabad won their maiden title in the IPL last under the captaincy of David Warner. Throughout the tournament, they displayed good consistent performances. Sunrisers, like many of the other franchises, has tied up with e-commerce retail giants to sell its merchandise which includes caps, t-shirts, polo and replica match jerseys among many other items. All these can be bought off the websites Tyka, amazon.in TKsportsworld and Flipkart.

The design of the Sunrisers Hyderabad jerseys is quite similar to the one that they used last year. The orange and black colour combo has been retained for this season. Hyderabad will sport the brightest jersey among all IPL franchises once again. With demand for the products soaring following the success of the team and the return of David Warner as the SRH roster captain, it would be advisable for fans to get their replica jerseys and fan SRH jerseys at the earliest. Buy SRH tickets 2020 here.

Mumbai Indians Jersey 2020: Among all the teams, Mumbai Indians are certainly the ones with most fancy merchandises. The franchise has certainly done well to spread its word of the ‘Blue Army’ by bringing in LED bracelets, wrist bands, different kinds of jerseys, caps and many more. In fact, they have a special site dedicated to this very purpose to purchase their merchandise – The Souled Store. You may also purchase merchandise on Inventa.

MI phrase their merchandise well-offering wristbands, pillowcases, hand fans and Malinga hairdos; which has special demand. Cheaper replicas can also be purchased on Flipkart or Amazon.in. Overseas fans of the franchise can purchase from Fandomcricket.

The home ground of this franchise is the renowned Wankhede Stadium in Mumbai. The stadium is filled with replica jerseys and a sea of other Mumbai Indians merchandise on match days as the fans spare no expense to show their support for the team. The blue and gold combination of their jerseys this year remain with three gold stripes down the side which is a typical Adidas feature who remain the official manufacturer of the Mumbai Indians’ clothing line. Buy MI tickets 2020 here.

Chennai Super Kings Jersey 2020: The Super Kings have teamed up with various outlets to allow their fans chance to buy merchandise and get their hands on the famous Chennai logo. The official site is the place you can head to pick up the replica jersey and many other things like t-shirts, caps, and much more. You can also purchase the CSK IPL Jersey Online on t10sports.

The jersey that will be worn in 2020 by the Super Kings is out now and can be viewed before the games begin. The yellow colour is famous for Chennai, and fans will be thrilled to see that colour is still with them. Buy CSK tickets 2020 here.

Rajasthan Royals have partnered with Alcis Sports as their official Kitting & Merchandise Partner from the 2019 edition. Fans will be able to show off their pink colours in support of this team as they begin a new season in the IPL. Buy RR tickets 2020 here. 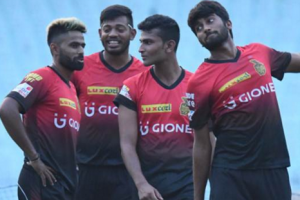 Kolkata Knight Riders Jersey 2020: You can buy KKR merchandise online on BookmyShow. The franchise also has a collaboration with e-commerce giant TheSouledStore to official replica jerseys and caps to the fans. Riding on its owner Shah Rukh Khan’s popularity, the franchise’s merchandise includes items like slippers, caps and team replica jerseys. Official merchandise is also available on the official site and at the City Centre 1 & 2 in Kolkata.

The clamour for the merchandise of the franchise is huge and to ensure that fans do not miss out on getting their favourite items, they can also be purchased from online sites such as Flipkart. The official merchandise is now also available at Junction mall at Durgapur city centre. The Kolkata jersey of the IPL is a combination of red-black colours that replaces the old purple-golden attire. Buy KKR tickets 2020 here. 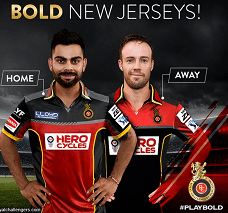 RCB has made a departure from their red and gold jerseys from the past. They will now sport new kits in black and red with a hint of gold thrown into the mix. While the home jersey is majorly red in colour, the away RCB jersey is mostly black. Their merchandise is manufactured by Zeven and sold by Zevenworld, which is also the official website of the franchise. RCB merchandise is also available on the team’s official website.

The Bangalore based side, which plays their home games at the Chinnaswamy stadium in Bangalore, has a range of merchandise on sale that includes home and away replica jerseys, training tops, caps, and fan t-shirts that come in both polo and crew neck. The fans also purchase their merchandise from fandomcricket.com/RCB. Further, some of their merchandise is also available on Flipkart & Amazon.in where fans can grab the articles of their choice at discounted prices. Buy RCB tickets 2020 here. 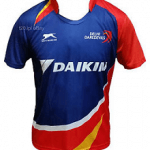 Delhi Capitals Jersey 2020: To meet the demand of the fans for the Delhi Capitals merchandise and jerseys, the franchise has tied up with various retail partners to ensure their fans don’t miss out on this part of the experience.

The replica team men’s jersey and merchandise such as heir official line of coffee mugs shot glass, jerseys and range of t-shirts, bags, slides and autographed bats & balls can be bought online from the official site. They will also be available at various e-commerce websites such as Amazon and Flipkart closer to match days.

The t-shirts for the 2020 edition of the IPL has been revealed by the franchise and it remains quite similar to its predecessor. The main colour of their t-shirts remains blue, similar to the blue of the Indian cricket team’s One Day International jersey, with a fair bit of orange thrown in which makes it Delhi’s own unique jersey. Buy DC tickets 2020 here.

If you don’t find your merchandise on the above links, you can always look at eCommerce sites like Flipkart or Amazon.in to buy IPL T-shirts online.