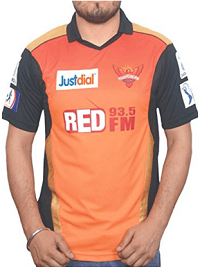 How to buy Sunrisers Hyderabad jersey online? Sunrisers, like many of the other franchises, has tied up with e-commerce retail giants to sell its merchandise which includes caps, t-shirts, polo and replica match jerseys among many other items. All these can be bought off the websites Tyka, amazon.in TKsportsworld and Flipkart.

The franchise has seen some great performances with the bat from the likes of David Warner while Shikhar Dhawan and Yuvraj Singh made good contributions as well in the past seasons. Ashish Nehra proved why he is one of the best bowlers in the tournament while Bhuvneshwar Kumar had yet another fantastic season. Mustafizur Rahman also proved to be a superb player for them during the course of the competition.

The team have also made the right noises in the player auctions at the start of the season. Afghanistan spinner Rashid Khan could prove to be a game-changer for the team which lacked a quality spinner last season.

With the team doing so well and preparing to defend their title, fans will be hoping to get their hands on Sunrisers Hyderabad jerseys for the upcoming edition of the IPL.

The franchise has already released the 2019 jersey well in advance of the competition. The design is quite similar to the one that they used last year. The orange and black colour combo has been retained for this season. Hyderabad will sport the brightest jersey among all IPL franchises once again.

The replica Sunrisers Hyderabad jersey can be bought for INR 1999 for both men and women for all sizes while the official fan jersey costs INR 999. The price is for both men and women’s jerseys and for all sizes. Fans can also grab Sunrisers Hyderabad merchandise at discounted prices on Amazon at certain times. However, with demand for the products soaring following the success of the team, it would be advisable for fans to get their replica jerseys and fan jerseys at the earliest.

Last season saw them emerge tournament winners. Nevertheless, they have made good additions to the SRH roster in the recently held player auction. Fans would expect similar or better showing in this edition of the Indian Premier League.

Their home ground is the Rajiv Gandhi International Cricket Stadium in Hyderabad and is only behind the Eden Gardens in terms of maximum seating capacity with it being able to handle 55,000 fans. The fans have never let its team down and have always come out in large numbers to support them on all match days. Cheer for your team in the official SRH jersey.

The demand for the jerseys is very high and it is advisable for fans to get their favourite ones at the earliest. Sunrisers Hyderabad 2019 IPL jerseys and t-shirts are available using the above links.